Unbound Visual Arts (UVA), a UNESCO/UNITWIN Network Affiliate, has been invited to present the Exhibition Earned: Women in Business & Labor at Boston City Hall from 8 March to 6 April 2017. The Opening Reception will be in the Scollay Square Gallery (third floor) on Thursday March 16th from 5 to 7 pm. Earlier that afternoon, the Hubert H. Humphrey Program at Boston University is holding a Panel Discussion with presentations by Humphrey Fellows and BU Faculty on gender equality in the workforce around the globe (Piedmonte Room fifth floor). These events will be in celebration of both International Women's Day-8 March and Women's History Month-March 2017. Boston University's Women's, Gender, & Sexuality Studies Program is a cosponsor of the UVA Exhibition.

Look forward to seeing you there!

Unbound Visual Arts (UVA), a 501(c)(3) non-profit, is organizing an exhibition related to the historic theme of “women in business and labor” at Boston City Hall’s Scollay Square Gallery, One City Hall Square, Boston, MA 02201. This exhibition is under the supervision and jurisdiction of the City of Boston's Arts and Culture Office. Learn more about UVA's thematic curated exhibitions here.

The purpose of the exhibition, through art created by today’s artists as well as other relevant components (documents, books, music, videos, artifacts, poetry etc.) is to provide the exhibition audience with an opportunity to learn and experience this important historical topic and its relevancy to modern times.

The exhibition coincides with Women’s History Month in the United States and International Women’s Day on March 8th, which has a 2017 theme of “Women in the Changing World of Work: Planet 50:50 by 2030.” The exhibition will run from March 8 - April 6, 2017. The opening reception on Thursday March 16th, 2017 from 5:00 - 7:00 pm with live music, refreshments, and short artist talks is free and open to the public.

Statement prepared by the Curator, John Quatrale, for this exhibition:

"The United States has a long history of women in the paid workforce and in business. But, full inclusion ‘in the world of work’ and participation has taken almost three centuries for improvements to occur and for women to begin to achieve gender equality in participation and benefits. Those successes and achievements have included higher pay, job appreciation, better working conditions, more opportunities, and increased value to their local, state and national economies. Those changes were often the result of severe hardships and sacrifices by women of all races, nationalities, backgrounds, education, and regions. They challenged laws and regulations as well as social standards and stereotypes and organized women to change public opinion. As a result of that hard work and commitment, organizations and businesses began to slowly change all across the United States and in many nations and eventually they were codified progressive measures by governments. More women have now become empowered to contribute to their personal, family and community well-beings in the United States and throughout the world. These improvements are manifested in many areas of today’s society such as the family, corporations, education, sports, healthcare, arts and culture, and the military. Despite these changes, however, the rights and health of women continue to be threatened in the United States and internationally. ”

Readings from Black Anthology: Adult Adoptees Claim Their Space, by the An-Ya Project, then Performance by Susan Harris O’Connor

Performance by Susan Harris O’Connor, MSW, award-winning writer- of a monologue on “Identity” from the Harris Narratives: An Introspective Study of a Transracial Adoptee (Sue is African-American, Seminole) 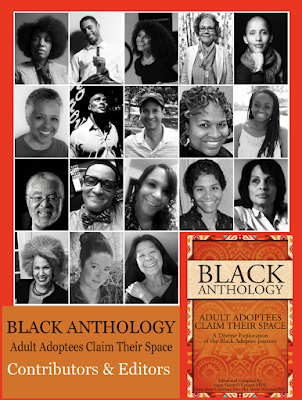 OPEN to the PUBLIC! Parking behind WSRC.
Accessible via Commuter rail (Brandeis/Roberts stop)

featuring Live Music by A Confederacy of Dumpsters

Our UNESCO/UNITWIN Highlights Reel for June 2015-Dec. 2016 puts an accent on inter-country and inter-university collaboration. Hope you will enjoy this visual depiction of some of the remarkable achievements of the Network Partners and Affiliates in India, West Africa, and here in Greater Boston, ranging from earning awards to preparing publications and hosting special events.

View the Reel at: https://goo.gl/NsZO7D 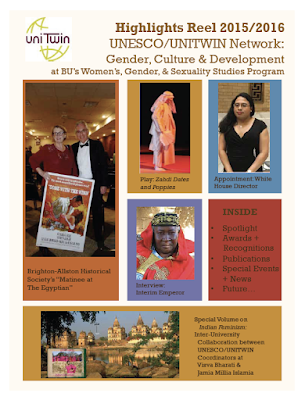