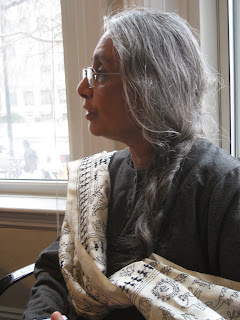 Aruna Roy, co-founder of Mazdoor Kisan Shakti Sangathan (MKSS- a non-party people's process, working towards a just and equal society), called on the Women's Studies Program at Boston University to share notes on issues of women’s participation in governance and development. Aruna reflected on the International Women’s Day Celebration on in her home state of . She participated alongside 7,000 other Indian women. She spoke of the remarkable change, “As we looked at seven thousand women with faces uncovered in front of the men of the village, we knew that a small revolution had occurred. The people of Khandach, including the men, saw value in celebrating women’s day. It was an acknowledgement of the political power of women, as much as of the new found power in electoral representation.” (From the forthcoming UNESCO Web Book, Another Side of : Gender, Culture and Development.)

Aruna was also invited to participate in the Conference, Frontiers of Innovation Celebrating 20 years of Innovation in Government, in . The Conference was hosted by The Ash Institute, , from March 30 – . Aruna was a speaker in Panel 1, entitled Innovations in Governance, Ethics and Accountability in the Public Sector. Aruna spoke of the role of MKSS in gaining the Right to Information (RTI) in . The panel overall was exploring three successful initiatives at the local, regional and national level. The aim was to share strategies increasing transparency and enhancing competence of leaders in the public sector. 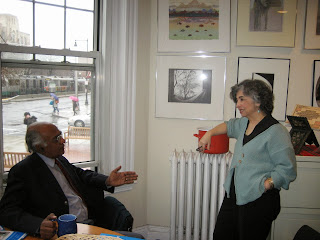 Dr. George Mathew, Director of the Institute for Social Studies, New Delhi called on BU's Women Studies Program. Here he is, at left, briefing Dr. Shahla Haeri, Director of WSP, on forthcoming activities hosted at his institute. These include a symposium to be convened on 24 April 2008, Women's Political Empowerment Day, on the topic of women, Panchayats (local governance bodies) and child rights. The Institute hosts a symposium annually on 24 April, to mark this date. On this day in 1993, the Government of India amended the Constitution, giving one-third of all seats in local bodies in the country to women. Dr. Mathew explained to Shahla and Dr. Brenda Gael McSweeney (pictured below), that since 1994 the Institute celebrates that day as Women's Empowerment Day with a focus on 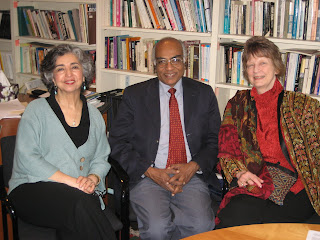 various crucial topics. Nearly 1,000 women attend each year to express solidarity and discuss common problems. The theme last year was HIV/AIDS, women and the role of Panchayats, while in 2006 the celebrations focused on Panchayats, water and sanitation. The Institute for Social Studies carries out research projects on local governance, women's studies, the environment and contemporary economic and political challenges, which mirror the issues most important to the UNESCO/UNITWIN on Gender, Culture and People-Centered Development.