Opening Night! Boston City Hall Exhibition, and Panel on "Women in the Workforce"

On Thursday, 16 March 2017, two Boston University (BU) Humphrey Fellows—Sevgim Çisel Çelik Keskin of Turkey and Pakaiphone Syphoxay of Laos—teamed up with MIT Fellow Heba Khalil of Egypt to present on the theme of “Women in the Workforce” in their respective countries at a symposium that served as the kickoff event of a Boston City Hall exhibition entitled “Earned: Women in Business and Labor.” The exhibition presented by Unbound Visual Arts, Inc. and the Mayor’s Office of Arts and Culture, was supported by the Mayor’s Office of Women’s Advancement, the Women’s, Gender, & Sexuality Studies Program (WGS) at Boston University, Gender & International Development Initiatives of the Brandeis Women’s Studies Research Center (GaIDI/WSRC), and the Boston Women’s Heritage Trail (BWHT). The exhibition coincides with Women’s History Month in the United States and UN International Women’s Day on March 8th, which has a 2017 theme of “Women in the Changing World of Work: Planet 50:50 by 2030.” The exhibition that will run until April 6th was curated by John Quatrale with Advisor Brenda Gael McSweeney of BU’s WGS, and received additional support for exhibition design from Alexandra Kontsevaia Peterson and graphic design from Cait Stuff.


BU HHHP Assistant Director Cyrus Konstantinakos moderated the symposium, which began with a short presentation by BU Assistant Professor of Art & Photography Toni Pepe. During the fall semester, Professor Pepe and her colleague Laura Grey led a two-session workshop on multimodal literacy for the Fellows to support their presentation on “Women in the Workforce” that they would deliver in November, at the Humphrey Fellowship’s Global Leadership Forum in Washington, DC. Toni gave an overview of the workshop and underscored the importance of having dexterity with the media through which messages are broadcast in the 21st century.

Hubert H. Humphrey Fellows to Lead a Presentation on "Global Perspectives on Women in the Workforce"

Hubert H. Humphrey Fellows from Boston University and MIT will be leading a presentation entitled: "Global Perspectives on Women in the Workforce" to be held at Boston City Hall on Thursday, March 16th, 2017 (Piedmonte Room, fifth floor). You are cordially invited to join and interact with the Fellows who hail from Turkey, Zambia, Egypt, and Laos. This event it taking place in the context of Women's History Month. 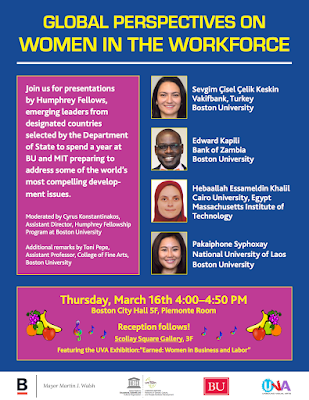 
Open to the Public! More information at:
http://www.unboundvisualarts.org/earned-women-in-business-and-labor/