"Her Village is Named Daggo" 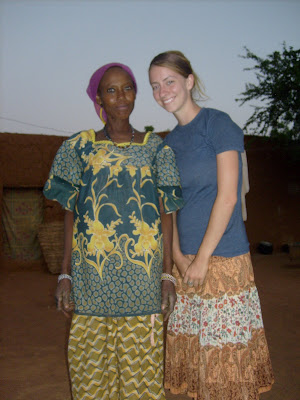 Left: Former BU Student Ashley Hughes with Oumima in Niger, Africa. Ashley participated in the Boston University Niamey Development Program from September to December 2007. In August 2008 she returned to Niger for a two-week trip to continue learning about nutrition activities in the country. While at BU, Ashley was a key actor in the creation of a new student club at Boston University called Students Against Human Trafficking, and served as its president.

"Her village is named Daggo. It sits 4 K (about 2 miles) away from the main road. When we turned off the main road we found ourselves without a road, just in a space between stalks of millet. The village is surrounded by the villagers' millet fields, their main crop and dietary staple. When we reached the village center we got out and found our way through the maze of mud walls to Natasha's house. She has only been here for 2 weeks, and she still has a hard time finding her house.

Her house is surrounded by a short mud wall that marks off her yard, or her concession. People spend most of their lives outside--even the cool mud houses get too hot, and there's no reason to stay inside for too long. The heat drives people to sleep outside, cook outside, rest outside, everything. The house is almost a prop, just a sign of wealth. Natasha's wealth is shown in other ways. She is the only village member to have a latrine (which is a hole in the ground). The villagers go in the sand and bury it. She has furniture (a table, some chairs, a cot). She also has a large house for just herself, compared to other families in the village.

I tried putting myself in her shoes. Here she is, in complete isolation from home and from a certain standard of living that we are used to. No one in the village speaks English or even French, forcing her to learn Hausa faster out of sheer necessity. For the first month of her service she is required to stay in the village without returning to the hostel in order to solidify her place in the village.

This one woman, Oumima, was Natasha's neighbor and "mother". She is about 60 or 70 years old, and she lives in the same courtyard with her co-wife. Their husband is dead, but the two live together with the youngest of their 18 children. They are both old enough that some of their kids are grown, but as per Nigerien tradition they take care of a lot of their grandchildren. Oumima wakes up at 4 am, draws water, goes to the fields all morning, comes back to make food for her family, pounds millet, works in the field more, comes back to draw water, pounds millet...the life is so repetitive and endless.

So it was hard to understand her smile, her warm hospitality, her insistence on feeding me, her encouraging words about learning Hausa. He eyes were bright and shining every time I saw her, in spite of the baby strapped on her back or the wood balanced on her head, whether she was bending over to sweep the courtyard or to tend to the fire. She had a patience about her that you never see back home. She's not anxious for things to change, she is accepting of life as it is. It hasn't changed for her and probably never will. But it does not break her spirit."
Posted by Kassia at 3:00 PM