Innovative Programs in Niger Focusing on Women and Girls Advancement

Aminata Kiello, a Founding Member of our UNESCO/UNITWIN Network based in Niamey, Niger, shared the following story of her recent work on programs supporting women and girls through the Lions Club Niamey Lantana:

Lions Club Niamey Lantana, of which I am a member, has donated a motorized canoe/ambulance to the populations of the Ayorou Islands in Niger, which has saved lives.

Before this well-equipped canoe when the pregnant women of Ayorou, for cases of difficult childbirth, were at work at night and had to be evacuated to the District Headquarters, they took simple canoes. The hippopotamuses attacked the boats, overturned them, and the pregnant woman, the companion (or the companions) in the pirogue, lost their lives!

Since the well-equipped Lions canoe exists, as soon as the canoe starts, the banging engine and its "put-putting" noise make the hippopotamuses "fly away." The ceremony of delivery of this canoe was made under the distinguished patronage of the First Lady of Niger (the wife of the Head of State), Dr. Lalla Malika.

Another contribution of Lions Club Niamey Espoir consisted in offering on March 19, 2019, awareness training to young students of the Adra School on personal hygiene. This is very important in our Sahelian environment where modesty prevents women from informing their daughters about the importance of menstruation (sometimes girls interrupt their schooling due to very painful menstruation), and the need to use sanitary napkins instead of old cut-up cloth pagnes. Kits containing sanitary napkins were provided free of charge to all girls in the school and even to their teachers.

Minds often formerly blocked, were unlocked by our explanations, plus a very good atmosphere allowed the girls to adopt the importance of personal hygiene. 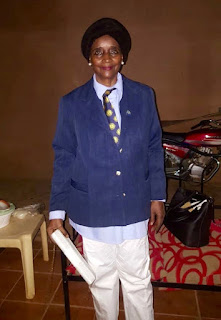 Aminata Kiello, pictured at right, has been instrumental in strengthening initiatives dedicated to promoting women's empowerment through the Lions Club of Niamey.

Additional projects assisting the populations in Niger have been carried out during the Presidency of the Lions Club Niamey Lantana in 2018-19 by Nahadjo Amadou Roufaye. Watch this space for the forthcoming photo story!
Posted by Brenda Gael McSweeney at 4:19 PM

On July 10, 2019, Professor R. Sudarshan of the O.P. Jindal Global University based in Sonipat/New Delhi, India met in Boston with Dr. Brenda Gael McSweeney, Director and a Founder of the BU-based UNESCO/UNITWIN Network on Gender, Culture, and People-Centered Development. R. Sudarshan, recently affiliated with our Network, shared the following concerning an upcoming conference on the right to development and a human rights-based approach to conservation of heritage.

"This entails going away from architects and experts, [rather] contacting local communities and people bringing intangible cultural heritage to life alongside conservation and protection of monuments and important places of historical and cultural significance.


Our university, the Jindal Global University, the School of Government and Public Policy where I am Dean, and the School of Art and Architecture where we have a Dean called Thomas Mical from the United States, are going to be the knowledge partners for ICOMOS, which is the UNESCO body that's responsible for the conservation of monuments. Gurmeet Rai is the President Designate of ICOMOS India.


This [Conference] is going to happen on 19 and 20 July in the premises of the Jindal Global University."


This exciting initiative also opens up the potential for further collaboration between the work of our Network-affiliated Brighton-Allston Historical Society (BAHS) and that of Gurmeet Rai, also a Founder of our UNESCO/UNITWIN Network, given the resonances between their cultural heritage preservation and promotion of gender equality initiatives, and their respective track-records. Now the knowledge base of Professor Sudarshan, Founding Dean of the Jindal School of Government and Public Policy, will be enhancing these partnerships.