News just in from West Bengal, UNITWIN Affiliate Jharna Panda has published an article in a leading Bengali newspaper examining the social ramifications of domestic violence through an ethnographic approach. See her article below. The English synopsis by Founding Member of the UNESCO/UNITWIN Network, Chandana Dey also former Editor for Social Science Press, New Delhi, follows. 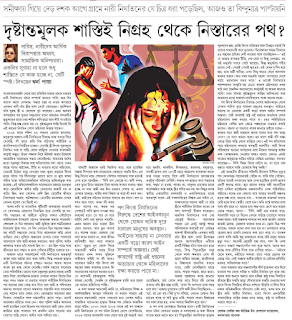 Jharna talks about the continuing state of the violence inflicted on women and gives some case studies (the names are changed) of the lives of women who are faced with both physical and mental torture every single day. She cites the results of a survey that covered 180 villages- from 2008 to 2018 that show that the level of violence is the same even after the passing of legislation that protects women’s rights. This is a ‘distant’ justice that women cannot avail of due to ignorance of the law, and mostly because they lack the economic means to report cases of violence to either the police or the courts. Frequently, cases where there is some level of negotiation- women have to return to abusive husbands, since they fear being burdens on either their own parents or their siblings. Here they return to a situation where there is no guarantee of their safety nor any sense of self-respect.


She starts by narrating a case of a man who killed his wife and his five - year old daughter (cracked open their skulls) while they were sleeping; their ‘crime’ was that his meal had not been served to him on time.

While Jharna worked on cases of domestic violence and attended sessions of counselling of married couples, the list of grievances was long and varied. Married women might indulge in one or other of the following activities that would incite the husband to violence:


- Renege on dowry provisions and promises (cycle/TV)
- While sweeping, they would raise dust in the courtyard
- Not clean the grinding stone sufficiently well after grinding turmeric    - Etc.


Dowry is not the sole reason for domestic violence. Khalida, a mother of five children tried to hide her contraceptive pills in the spice box. Her husband found them and threw her and the children out of the house. Khalida did not have the wherewithal to go to the police; her chief worry was how to find shelter for herself and the children.

Then there is the case of Salma. Her husband tried to kill her and left her for dead in the fields. Neighbours found her and a case of domestic violence was lodged against the husband. Her crime- she was childless even after some years of being married. When Jharna met her last, she had returned to her husband. ‘Don’t be angry, Didi,’ said Salma. ‘My husband told me he would take me back if I withdrew the case. What else could I do? I can’t be a burden on my parents or my brothers’ families. Finally, this is the only home I have’.

The Survey showed that the main reason for husbands to get angry was that their food might not be ready on time. Around 2000 husbands interviewed replied in almost the same way. They were asked: ‘If you come back from the fields and your food is not ready, do you lose your temper?’ All the husbands replied in the affirmative- ‘Yes, I do get angry. Surely that’s natural?’ Some also said that they tended to throw whatever they could find that was close at hand. Then, after they have eaten, their mood improves and they make up the quarrel.

When women were asked whether they would seek legal redress to domestic violence, many said they did not know about the laws. Perhaps the most that women might do is to go to the panchayat with their complaint. ‘Will my husband pay my bus fare to go to the police station to report his crime’ asked one victim, ‘and who will come with me’?

Many women simply consider taking their own lives. Marital rape is common in many homes. One woman stated that even though her children were educated and had gone to college, she had to submit to her husband whenever he desired her. The house is small and the young children see and hear everything. Yet the State has decided that it cannot be involved in the question of marital rape.

The Survey clearly shows that the status of rural women in Bengal is unchanged over the last two decades.

~ Synopsis in English by Chandana Dey

"The question of domestic violence suffered by women, especially by rural women, is a much talked about 'topic' in mass media as well as in academia. While this reflects a certain recognition of the endemic nature of this violence, the perfunctory manner in which the issue is generally dealt with betrays a callous understanding of the social and humane context of this domination.

Almost any such discussion invariably ends up with a hoarse call for "exemplary punishment". One needs only to walk down winding mud tracks and sit for a while on the verandah of any thatched hut listening to stories of the 'victims' to understand the vacuousness and insensitivity of such 'discourse'. Those women live in a world far beyond the reach of long arm of law. Local police agencies are almost inaccessible for any of those women. They consider – quite understandably – the khaki clad police an alien entity more threatening than their drunken husbands.The cost of judicial redress is simply not affordable.

But more crucially, violence on women is an issue which does not fit in its entirety within the pages of a statute book. Most of those rural women live a life organically linked with their husbands, the insufferable torture notwithstanding. Who is going to look after her if her husband lands up in jail? Neither is she as insensitive as a hardened media commentator not to see the human behind her bullying husband. That very man is breaking his bones from dawn to dusk and is taking many a blow silently to take care of his family. Is throwing him behind the bar the only 'solution' we can think about?"

Jharna poses some provocative questions that help readers think critically about the issue of the suppression of women in Bengal through a nuanced lens drawing from her own field research in remote areas. The publication is incredibly timely, as the UN International Day for the Elimination of Violence against Women approaches on November 25.

About the author (left): Jharna Panda is working as a Research Associate in the Centre for Studies in Social Sciences, Calcutta. Jharna is affiliated with the UNESCO/UNITWIN Network on Gender, Culture & People-Centered Development


The City of Boston's second Poet Laureate and first female, Danielle Legros Georges, gave more of a 'performance' than a 'reading' – – photos below give the flavor.

Danielle shared poems from Letters from Congo (where her family had fled from Haiti's Duvalier regime when she was four years old), and from The Dear Remote Nearness of You. The latter included a work called "Intersection" dedicated to Haiti in 2010 after the earthquake, beginning "The earth shook. A portal opened. / I walked through it. The earth shook..." (24) that literally brought the room to pin-drop silence. One of her earlier publications is Maroon: a selection of poems in which she "explores her heritage as a Haitian and as an American immigrant…" (back cover). We commend to you Danielle's work and events: inspiring and powerful!

The UVA Board of Directors and Council of Advisors are grateful for the encouragement and support of Unbound Visual Arts initiatives over these inaugural five years! The Founders of UVA were honored on this occasion. Early alert for a UVA Women's History Month exhibition opening on Saturday, March 10, 2018: please save the date!

Posted by Brenda Gael McSweeney at 11:56 AM

While the biography cum memoir I’m researching is about my Russian grand-mother, née Kotya Jonas, a lot has now come to light about my grand-father, Nitai Gopal de Sarkar. This year- that is also the 100th anniversary of the October Revolution of 1917- that was to have such a momentous impact on the life of my Russian grand-mother and her family- is the year I decided to ‘retire’ from pressing engagements and devote myself ‘entirely’ to research on family history and archives. I planned to write mostly from my rural idyll in Santiniketan (Bengal, India) where my grand-parents acquired a plot of land from the Visva-Bharati University and built themselves a small house.
Two meetings in 2017 have proved fortuitous in shaping the direction of the book: I discovered an ‘aunt’ who is a photo-archivist and anthropologist and who lives in Paris. Irène Jonas is the daughter of my grand-uncle, my grand-mother’s youngest brother, Serge. Irène and I not only exchanged letters and photographs but we also met this summer in London and found so many things in common, while trying to unearth our joint family history. The photograph of the Jonas family taken in the summer of 1934 (my mother looks about three years old) is from her family collection.

Later this summer, I met a charming young Swiss couple- Sophie and Diego who had come to Santiniketan for a few weeks on a community-health survey of Santal villagers and their food habits. Sophie is a Doctor of Opthalmology and Diego makes specialized microscopes for surgery.

I found them both to be extremely willing to help further my research into unraveling my grand-parents’ past life, part of which was spent in Switzerland in the 1920s and 1930s. Diego recommended I look into the digital holdings of the Swiss newspaper, Le Temps that has recently digitalized its 200 years of archival materials. Sophie wrote off to the Archives of the University of Geneva asking whether they had any information regarding a student who would have graduated from the University of Geneva around 1930.

Archives, as other things, are most punctiliously kept in Switzerland. Sitting in my cottage in Santiniketan, I was able to delve into my grand-parents’ past, recover documents I had thought lost forever, and piece together some part of their life’s journey. My grand-mother, Kotya Jonas, would have come to Switzerland in 1922, along with her family from Russia. My grand-father did his first degree in medicine from Kolkata and then went to Paris for three trimesters. He then asked to be transferred to the University of Geneva where his final degree was conferred on him. He also wrote his thesis in French. He even applied to Edinburgh to do an FRCP (Fellow of the Royal College of Physicians)- but since I only have an application letter dated in 1929, I assume that he did not manage to follow up with this decision. I think my grandparents met in 1930 and married soon after, and my mother was born on 19 June 1931.

The documents, diligently collected by the Archivist at the University of Geneva were sent to Sophie who sent them onto me. I think I was so stunned that I could not even thank her properly- so moved at seeing these letters written almost nine decades ago.

My grand-father not only acquired a Russian wife; he also gained an entire family. The photograph only speaks of good times- but there must have been heartbreak when Kotya decided to leave for India with her five- year old daughter and make India her home. This family photograph might have been one of the last occasions when Kotya wore a dress. At this time, my grand-father was practicing as a rural doctor in the Canton de Vaud with my grand-mother doubling up as his nurse. It seemed to be a satisfying life. What then made my grand-father decide to come back to India?