Dr. Roberta Micallef presented a chapter of her ongoing exploration of women’s autobiographical works in the late Ottoman Empire and the Republic of Turkey, on 22 October 2014 as part of the Women’s, Gender, & Sexuality Studies’ lunch discussion series. The chapter she shared concerned prison narratives by political prisoners. Micallef’s study of Turkish women’s autobiographical works starts with late nineteenth century first person narratives by Ottoman royal women and women in the employ of the Ottoman household as well as important figures of the Turkish War of Independence such as Halide Edib Adivar. Women intellectuals, poets and writers of the Republic of Turkey and their changing notions of self over time and their changing notions of what should be included in life writing are covered in the intervening two chapters.

Following a chapter on “Dutiful daughter of the Republic,” that on prison narratives on which the lunch talk was based explores the limits of autobiography and women’s autobiographical writings. Micallef examined when and under what circumstances language fell apart or what particular stories were simply too overwhelming to be narrated by the subject but were supplied later by other interlocutors. Micallef explored the effects of incarceration on the prisoners and their families, notably the impact of daughters’ imprisonment on their mothers.

Based on the texts she analyzed, Micallef’s preliminary conclusions are that women in their daily lives face trauma simply because they are women, whether it is in the form of domestic violence or sexual harassment; that women who engage in political activism gain a new more independent and confident voice; that women who face sexual violence are able to overcome it if they can contextualize in terms of a larger pattern of violence; and that writing or speaking about their experience helps them to overcome the trauma.

Watch this space for news of her next publication!

Introduction of the speaker by Professor Deborah Belle, BU’s Department of Psychological and Brain Sciences and former Director, WGS:

In recent years, among many honors and activities, Roberta has been:
- participated in a Journal of Middle East Women’s Studies Distinguished Lecture and Research Workshop;
- invited by the U.S. Department of State, Bureau of Educational and Cultural Affairs to serve on the Critical Languages Scholarship Turkish Language Advisory Board; and
- invited to join a network of 17 international scholars examining Muslim women’s autobiographical writings, which was sponsored by the Arts and Humanities Research Council of the United Kingdom.

She is co-editor (with Sunil Sharma) of On the Wonders of Land and Sea, a collection of essays on Muslim travel narratives.”

Posted by Brenda Gael McSweeney at 10:36 AM

Exciting news came our way that we want to share with you - UNESCO's E-Learning Tool on Women in African History just won first prize from UN Women and ITU (International Telecommunications Union)!

This tool was developed with input from the UNESCO/UNITWIN Network anchored at Boston Unversity's Women's, Gender, & Sexuality Studies Program. It features a module on Warrior Princess Yennega, a powerful figure in Burkinabe history who is famous for her leadership in defending her territory from invasion in the 12th century.

The managers/developers of this unique site aimed at African youth, UNESCO's Sasha Rubel and Edouard Joubeaud, used photographs from Brenda Gael McSweeney's portfolio on Burkina, as well as published articles by women's education pioneer Scholastique Kompaoré and Brenda with Casey Fox. For a glimpse of some of this material from the Women in African History interactive site, please click here.

The E-Learning tool is an enticing combination of comic strips, music, quizzes, and resource material to engage learners from all backgrounds and boost awareness of women's historic roles across Africa and in the African diaspora. Do check out this award-winning site here! For more information about the Gender Equality Through Technology First Prize Winner and the impact of the Women in African History site, please see this article. 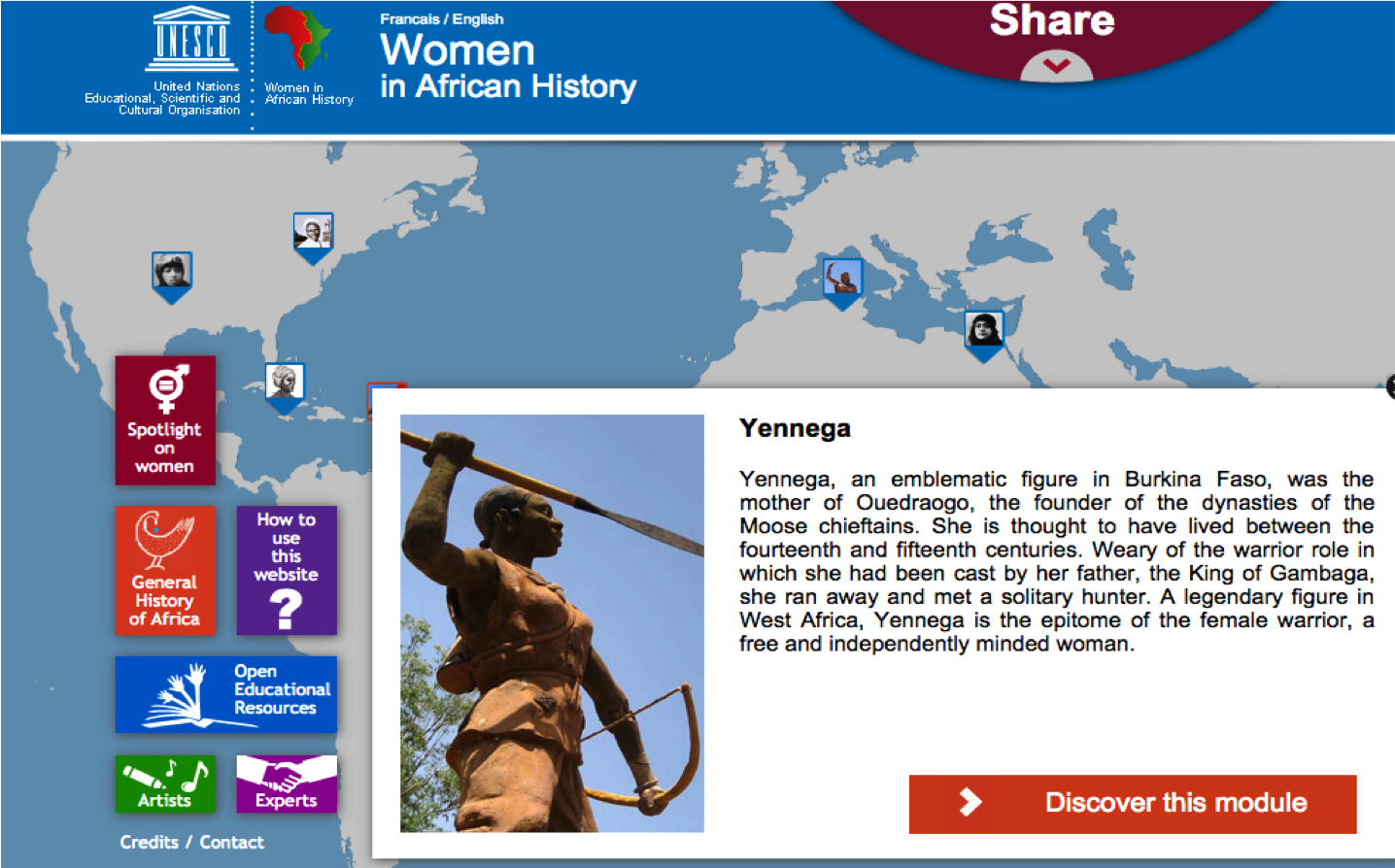 Unbound Visual Arts participated as a guest organization in the Allston Open Studios 2014, to help boost the creative economy for artists, art supporters, and all in the Greater Boston area. 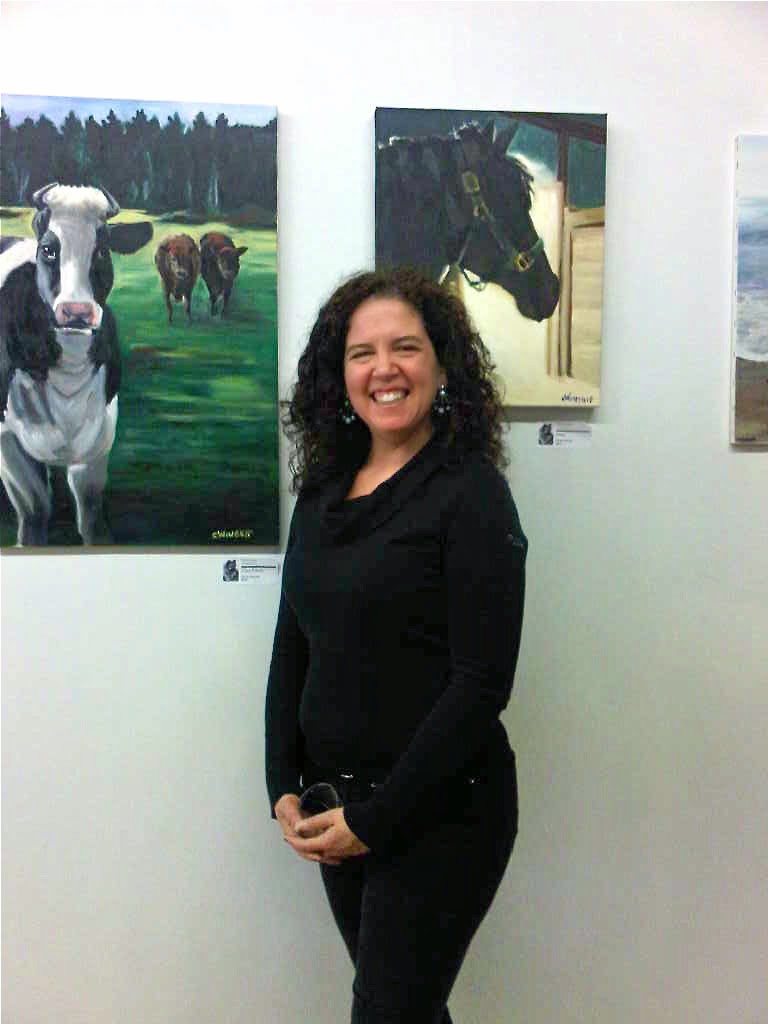 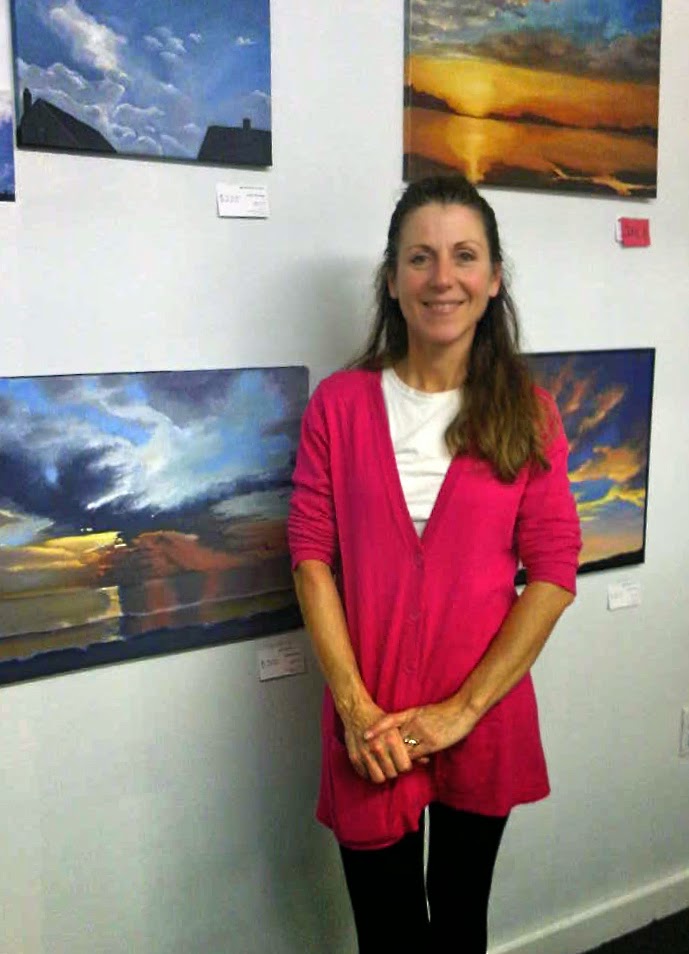 Sharing the studio space is UVA artist Nadia Richman -
featured are her dramatic seascapes
from Hull and  other nearby coastal vistas. 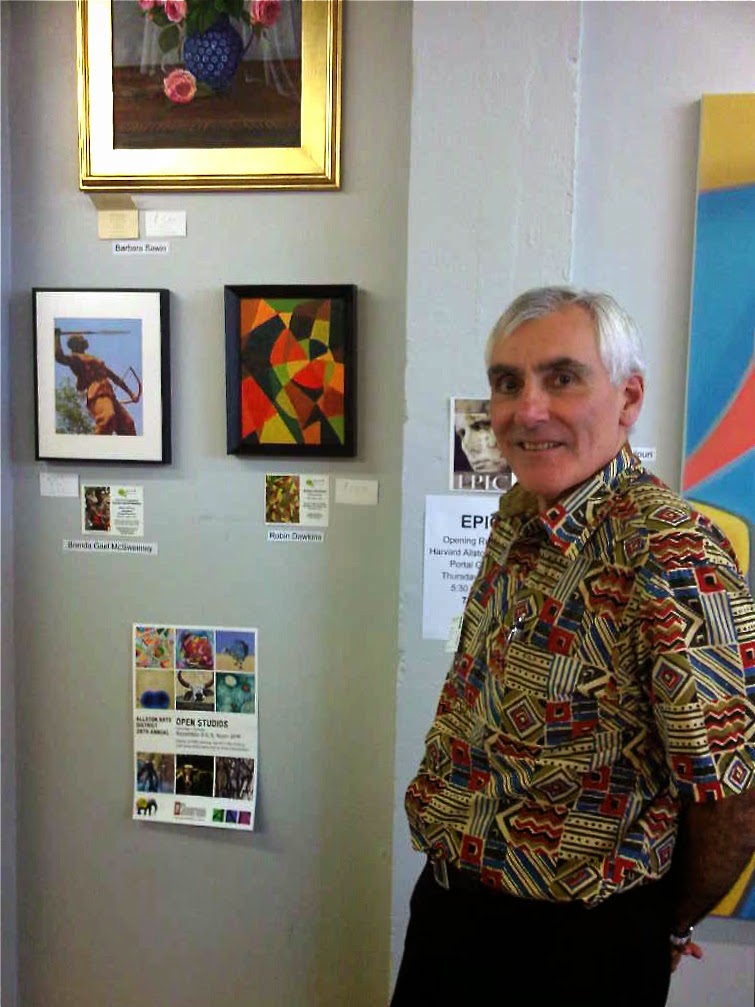 UVA Executive Director John Quatrale curated the exhibit in the UVA Suite. Here we catch a glimpse at left of the Warrior Princess Yennega (Burkina Faso) by Brenda Gael McSweeney, UVA Council of Advisors, from UNESCO's prize-winning African Women in History e-learning tool.
At right is a painting by UVA artist Robin Dawkins,
and one by Sustaining Member Barbara Sawin at top. 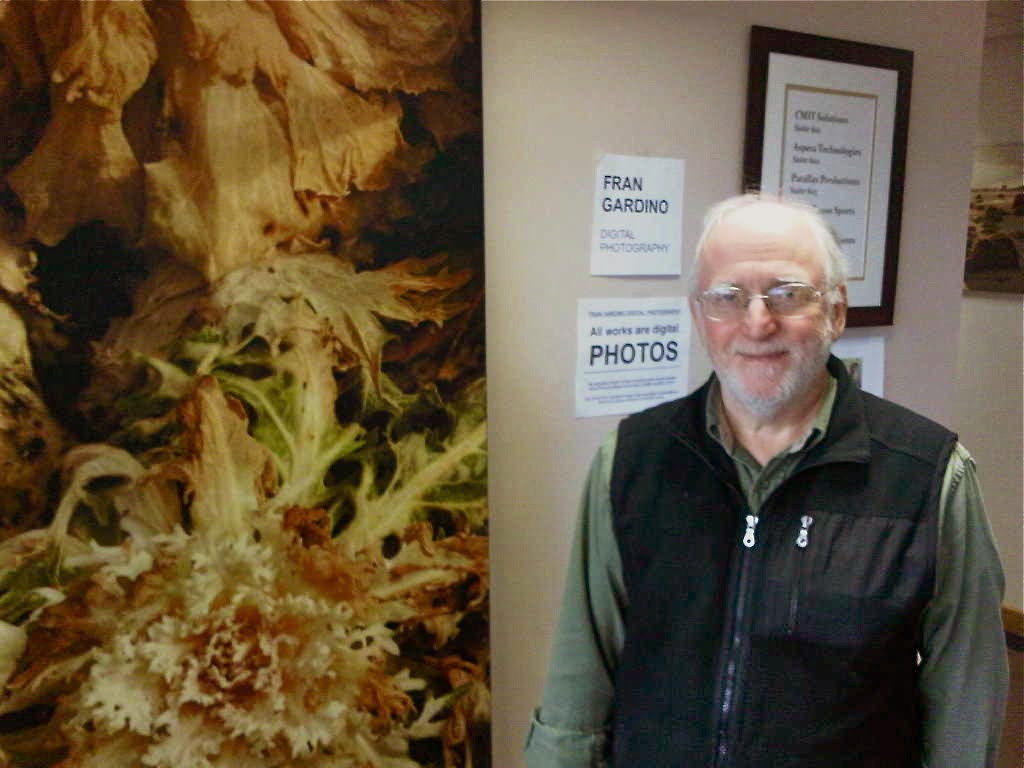 UVA Photographer Fran Gardino's exhibition occupied the top floor of the Allston Open Studios.  Fran also screened an advance viewing of his Brighton-Allston Time Travels 360-degree photos!
Fran is on UVA's Council of Advisors, and the
Board of Directors of the Brighton-Allston Historical Society.

Unbound Visual Arts is the UNESCO/ UNITWIN Network on Gender, Culture & Development's newest affiliate - bringing an additional accent to our engagement in the cultural arena and educational outreach.

We are pleased to announce that Gurmeet Rai, a Founding Member of our UNESCO/UNITWIN Network was recently featured in Vogue magazine, the July 2014 issue for 'Monuments Women'! She hopes the publicity will help in promoting the cause of implementing the Red Fort conservation plan in a systematic integrated way. Also, it may be helpful in the Punjab government taking up and implementing the well thought out cultural heritage policy that Gurmeet and the CRCI (Cultural Resource Conservation Initiative) have spearheaded.  Congratulations, Meeta! We're happy to invite you to a Hadassah-Brandeis Institute lecture on Sunday 9 November, 2014 at 7:30pm at Brandeis in Waltham. Professor Banda (Zimbabwe) has a reputation as a forceful and knowledgeable speaker!

Fareda, who hails from the Faculty of Law, School of Oriental and African Studies (SOAS) - University of London, has prepared a report for the UN on discrimination against women and is considered a leading expert on CEDAW (Convention on the Elimination of All Forms of Discrimination against Women) and other treaties on the rights of women.

Likely topics: Do global women's rights seem like a tug-of-war?
Normative gains, especially in the area of violence
The latest backsliding on issues such as reproductive rights


This Hadassah-Brandeis Institute-hosted event of the HBI Project on Gender, Culture, Religion and the Law, is being co-sponsored by The Women's, Gender, & Sexuality Studies Program (WGS) at Boston University; and by GaIDI (Gender and International Development Initiatives) of the Women's Studies Research Center (WSRC), and the International Center for Ethics, Justice and Public Life, both at Brandeis University.
Please feel free to spread the word! 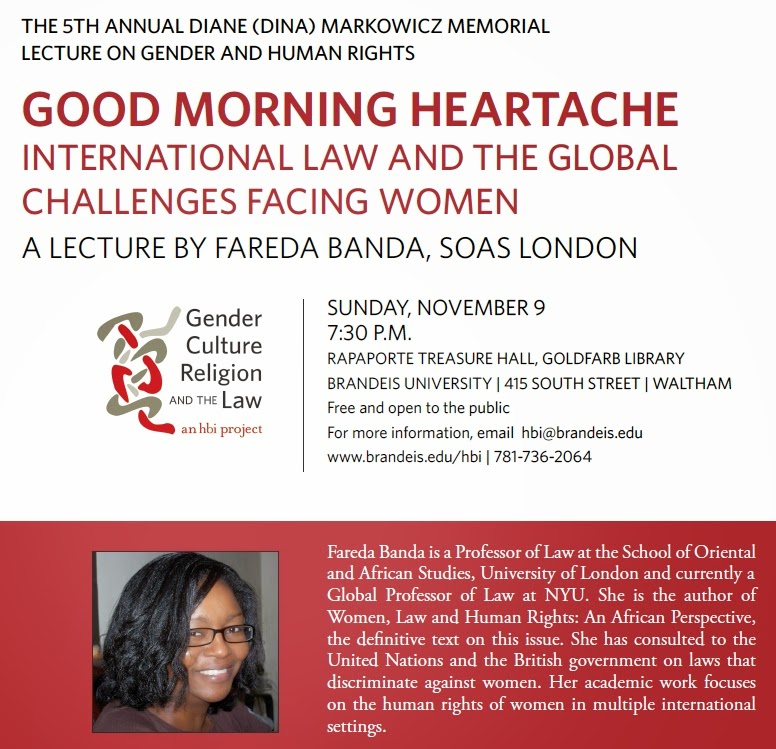 Posted by Brenda Gael McSweeney at 11:30 AM