Nicole Rizzo's "To Stop Treading Water: Monologues that Challenge the Undertow of Trauma" in the UNESCO/UNITWIN Diary Series

The following video based on my Kilachand Honors College Senior Keystone Project at Boston University concerns the pervasive socio-cultural problem of sexual assault and/or trauma, particularly on college campuses. This is a topic continuously in circulation on various social media platforms (just think: Harvey Weinstein, Kevin Spacey, the Stanford swimmer Brock Turner, and the President of the United States). Movements such as #MeToo and feminist plays such as for colored girls who have considered suicide/ when the rainbow is enuf and The Vagina Monologues have powerfully given voice to survivors by offering intersectional perspectives and raising awareness. My Keystone Project was essentially an activist endeavor – one that aimed to deconstruct the universalizing narrative of the “victim” and the “survivor” seen through the historical lenses of racism, sexism, homophobia, and ableism. I have written a Vagina-Monologue-choreopoem-inspired play, To Stop Treading Water: Monologues that Challenge the Undertow of Trauma, that combines monologues, movement, and music to address the violence of rape culture and explore the diverse array of trauma responses. The play was performed on April 24th and 25th, 2018 with the assistance of a team of committed performers and designers, who also assisted with the development of educational multimedia (i.e. videos/graphics) materials and a website to contain them. Research on postmodern drama that grapples with PTSD (Post-Traumatic Stress Disorder) and sexual assault (which also served as the basis for my senior Honors Thesis in English) and the use of ethnographic approaches to gathering ideas, such as conducting interviews with sexual trauma survivors, informed my work. In essence, my Keystone Project was an attempt to give voice to survivors of sexual assault/trauma and inspire a call to action.

Congratulations to Yaaminey Mubayi on her Fulbright-Nehru Academic and Professional Excellence Fellowship!

News in from Yaaminey, who joined our UNESCO/UNITWIN Network as a Founding Member with the New Delhi-based Cultural Resource Conservation Initiative in 2007:

Within our UNESCO/UNITWIN Network over the years, Yaaminey has been contributing in such arenas as livelihoods in Punjab and Orissa, endogenous tourism including gender implications such as commercialism competing with women's traditional livelihoods, and intangible cultural heritage.


In the first e-book of our UNESCO/UNITWIN Network, Yaaminey contributed a chapter entitled "Poverty of Choice: Gender and Livelihoods in Punjab." We now look forward to her new book in the arena of water and human settlements in Maharashtra.

Summary Bio: Yaaminey Mubayi is an Historian and Social Development Professional with twenty years of experience in the field of Cultural Heritage Studies. With an interest in fieldwork-based applied learning as her core motivation, she has combined research and institutional experience with academic practice and forged an innovative professional niche in the area of Cultural Heritage and Development Planning.

~~~
Beyond the Book XI with 85 works of art was opened to the public at the Faneuil and Brighton Center Branches of the Boston Public Library on November 9, 2019.

Below, a glimpse of the reception at the Faneuil Library as well as an event description by Exhibition Organizer, Ronni Komarow. The events are cosponsored by the Friends of the Faneuil Library, and supported by the UNESCO/UNITWIN Network on Gender, Culture, and People-Centered Development at Boston University Women's & Gender Studies. (Photos by Brenda Gael McSweeney) Three cheers for Liz Breadon! Liz, who served on the Board of Directors of our UNESCO/UNITWIN Affiliate the Brighton-Allston Historical Society, made history on November 5 2019 by winning the election to become the first-ever woman representing Brighton-Allston on the Boston City Council!

Her key plans include:

Liz and her progressive platform, with 58.5% of the vote in the Municipal Elections, earned a decisive mandate! 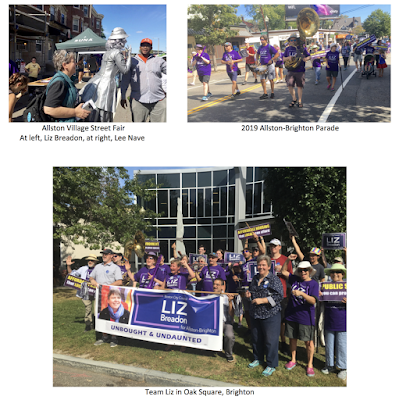 You are invited to Beyond the Book XI, cosponsored by Friends of Faneuil Library, our UNESCO/UNITWIN Affiliate!

On view at both the Faneuil Library and the Brighton Library through Sat., Jan. 11th 2020

OPENING RECEPTION
Beyond the Book XI
Sat., Nov. 9th, 11:30 am.–1:30 pm.
An Exhibition of Artist's Books and Book-Related Art Inspired by Books

This exhibition is a joint effort involving both the Faneuil and Brighton Branches of the Boston Public Library. Works are distributed between the two branches.

Parking for the Faneuil Library is available at the Presentation School Foundation lot, diagonally across Oak Square from the library. Enter from Tremont St., just past the bus shelter. The Brighton Library has a parking lot; from Washington Street go up Chestnut Hill Ave. and enter on the left, just past the Brighton Courthouse.

Exhibition Programming: There will be a series of exhibition-related programs offered at both branches. Please stay tuned for details. Ronni Komarow of FOFL coordinated this exhibition.

Cosponsored by The Friends of the Faneuil Branch Library (FOFL), and supported by the UNESCO/UNITWIN Network on Gender, Culture, & People-Centered Development of Boston University's Women's and Gender Studies Program.

We're delighted to announce a new series that will be appearing on our UNESCO/UNITWIN blog!

In an effort to amplify grassroots voices in this phase of our UNITWIN, Founding Member Chandana Dey from West Bengal, India proposed having a young women's forum. Chandana states "This initial idea came from my interest in a young all-girls' football team. The co-coach is Mousumi Murmu. I thought that it would be interesting to have dialogues with these young women- and perhaps this might lead to some gender awareness and skill building work. Mousumi has been taking computer programming classes, and she will soon be working with a Santal professor in Jadavpur University who works on discrimination. I thought Mousumi's 'WhatsApp diary' (would be translated by me) would make interesting blog entries. And I also thought that the other UNITWIN partners might have similar stories they could share."

Here is the first entry in this young women's forum series, by Mousumi Murmu!

From the Diary of Mousumi Murmu


My name is Mousumi Murmu and I live in the village of Phooldanga. On 15 March, 2018, I joined work on a survey on the socio-economic conditions of Adivasi girls in the villages of West Bengal. There were many other students from different districts of Bengal on the survey and this was a chance to meet them. There were two other girls from Birbhum on this survey- Anjali Soren and Bahamoni Tudu. I met two other girls from Rajnagar Block, and along with them, made the acquaintance of one of their teachers, Mr. Tapan Kumar Ray. He was a retired school-teacher. He told me that he had formed a girls’ football team in a village in the Rajnagar block (Suri district). Besides football, he was trying to make these girls self-reliant, trying to prevent child-marriage, through an organization he founded called Jeevak Herb Welfare Society.

In October 2018, after my survey work got over, Tapan Sir got in touch with me and told me he needed my help in forming a girls’ football team in the Bolpur area. He asked me to think over his offer. I thought it over and said I would try because I was fond of games. He informed me that the project would start in December.


On 8 December, 2018, Tapan Sir and I went to the village of Ballavpurdanga to ask school-going girls whether they wanted to learn to play football and whether they would be able to come and play on the football field near the village of Bidyadharpur. We got a list of 25 girls who were interested. Among them were some girls who had given up on school. Then we went to the villages of Bidyadharpur, Banshpukur, and Kayetpukur. Here I had the help of my mother. We found many enthusiastic girls. On another day, Sir and I visited the villages of Uttar Sehala and Kutipara. In the meantime, Tapan Sir visited the village committee head and other notable individuals in Bidyadharpur village to get permission to train the girls on the Bidyadharpur football field.


Tapan Sir then informed the girls that the football training would start in the first week of January. We had got around 80-85 names of girls from seven villages. On the first day, around 50 girls came to the Bidyadharpur field. Gradually the numbers reduced as the training progressed. Tapan Sir told us that a coach, Mr. Tarun Manna, from Kolkata would come to train us twice weekly-he had also coached the girls’ team in the Rajnagar block. Some girls dropped out because they had not played before and did not have the stamina to play on the football field as well as do all the work at home they were expected to do.


Tapan Sir gave a name to the Bidyadharpur football team- ‘LAHANTI’- this is a Santal word that means ‘Go forward’. Tapan Sir has asked for help in funding our Lahanti team through his organization. The Panrui police station got to know of the girls’ football team and has paid for the uniforms of the team. At the back of each shirt is the name of the football player and a number, and embossed is the name: Panrui P.S. Tapan Sir also got together funds to buy socks and shoes for the team players.


In addition, the girls get a snack after each game; sometimes, soaked chickpeas; sometimes boiled eggs, and at other times, bread and banana. The girls’ team is now playing with other teams and sometimes winning matches. The girls appreciate greatly the help from their coach. There has been appreciation of our football team from surrounding villages. At present, there are 45 girls on the football team.