We are thrilled to share with you an update from Asha Mukherjee of the Department of Philosophy, Visva-Bharati, Shantiniketan, West Bengal, India - a Founding University Partner of our UNESCO/UNITWIN. Most recently, Asha participated on a panel entitled "Women Philosophers and the Enrichment of Philosophy" at the 23rd World Congress of Philosophy at the University of Athens. The following is an abstract of the paper "Feminist Concern in India and the "Other"" which Asha presented as part of the panel.

"At the core of the Women's Rights movement debate, there lies a need to interrogate the very being of individual person, self, and "other" for accommodating the claims and the counter claims of rights to be creatively human, the promise of mankind which gets threatened by any destructive self of the few in power either political or social or economic or religious. The history of the world has witnessed such threats again and again. Women's rights discourse is meaningful only in the context of the "other" which presupposed that there is self and the 'other' which is also a self (basically) and the self must relate to the other self. If the self is relating to the other, then only social relationship becomes meaningful. The question is how to relate with the other. The relation with the other could be cohesive, peaceful, cooperative, and dutiful or it could be antagonistic, demanding, claiming, counter-claiming. In society, the other as co-human exists (whether we like it or not) whose existence is a requirement of my existence in the society. What kind of requirement is it? Is it just a social need or is it deeper than that? These are important questions which I would discuss in the paper. But the "other" can exist as human - a dignified person and demands reciprocity on the part of every individual - as Kant would say 'Treat Humanity as an end and never as a means only' (Foundations of Metaphysics of Morals). It is the inter subjectivity, the relation with "other" which is the cornerstone that makes my world and society meaningful even from an Indian feminist perspective. Questions of identity of the women and identity of men, the nature of discrimination with respect to gender and related questions would be dealt with in depth and finally if there is no discrimination of gender, does feminism make any sense would be discussed."

In addition to her involvement with the 23rd World Congress of Philosophy (August 4-10, 2013), Asha recently presented her paper "Religion as a Separate Area of Study in India" at a workshop entitled "Whose Religion? Education about Religion in Public Schools". The workshop was held at the University of Ottawa in November 2013. While in Canada, Asha also gave two talks on "Social Justice in India: A Gender Perspective". Asha was also the Founding Director of the Women's Studies Centre, Visva-Bharati. We're excited to read about and share the important work that our UNITWIN colleague Asha has been doing around the globe!
Posted by The Couscous Diaries at 9:47 AM

Women on the Move in the Srihaswani Villages

We are pleased to share with you an article penned by our dear friend, Chandana "Mamlu" Dey. Chandana Dey is a co-founder of the Bhab Initiative in Santiniketan, West Bengal, India - a founding partner in the UNESCO/UNITWIN Network on Gender, Culture, & Development.  To read more about Women's Day in India and initiatives taking place in West Bengal, please see the article below:


"Young women are no longer content with only discussions. They are on the move. Recent initiatives include the ‘Solidarity March’ on the 8th of March. Some young people have started going for auxilliary nursing training in a Hospital in a neighbouring district. The aim is to provide trained nursing aides in each Bengal village, thereby providing a source of income for some and benefits for many.

A visit by the organisation, Apne Aap that works on reducing the flow of human trafficking, in January 2014 to Santiniketan may lead to the establishment of a helpline for vulnerable women. The Srihaswani (Creative Manual Skills for Self-Reliant Development) team, ably led by Anuradha Ghosh, is likely to be at the forefront of this inititative. Anuradha has taken over the supervision of Srihaswani (AHIMSA) Project activities, once Chandana Dey (former project Coordinator) had to leave the area and shift to Delhi, as well as the fledgling tourism programme that helps raise funds for the development and educational activities in the ten villages." 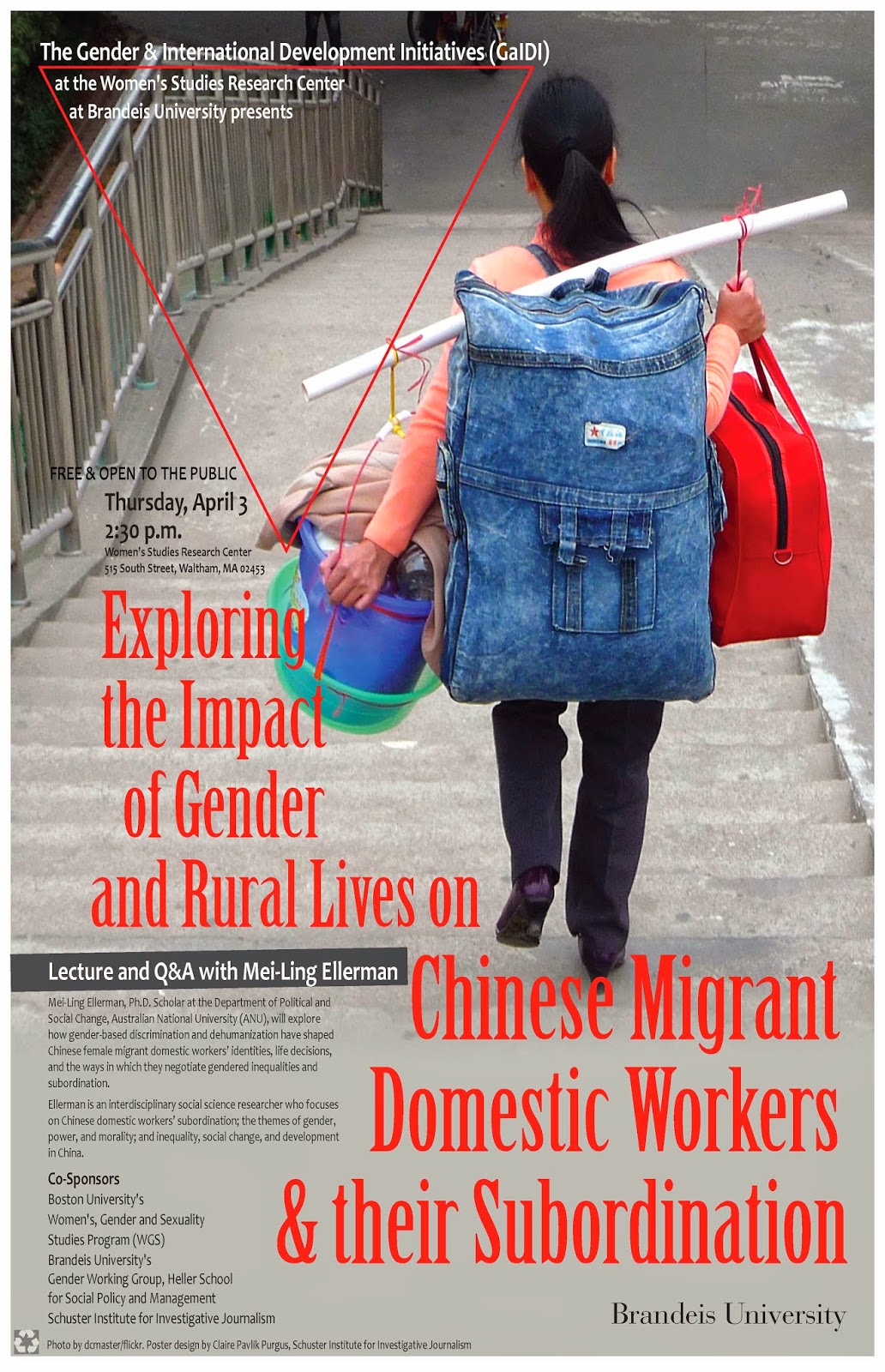 Lecture and Q&A with Mei-Ling Ellerman
Mei-Ling Ellerman, Ph.D. Scholar at the Department of Political and Social Change, Australian National University (ANU), will explore how gender-based discrimination and dehumanization have shaped Chinese female migrant domestic workers’ identities, life decisions, and the ways in which they negotiate gendered inequalities and subordination.
Ellerman is an interdisciplinary social science researcher who focuses on Chinese domestic workers’ subordination; the themes of gender, power, and morality; and inequality, social change, and development in China.

Mei-Ling has conducted research for years on Chinese migrant domestic workers, estimated at over a quarter of a million in Beijing alone.

The Women’s, Gender, & Sexuality Studies Program at Boston University was proud to host “A Revolutionary Moment,” a Conference focusing on women’s liberation in the late 1960s and early 1970s from March 27-29. The Conference brought together a diverse group of activists, filmmakers, poets, authors and others, creating a rich dialogue on the legacy of the Women’s Liberation Movement and its application today. Open to the public, the Conference brought the UNESCO priority of gender equality to a large audience, inspiring the next generation of women to understand the history of revolutionary women’s movements and to give them the tools to move forward towards equality.

Many members of the Boston University UNESCO/UNITWIN Network on Gender, Culture and Development were deeply involved in the conference. Professor Deborah Belle, Co-Coordinator of the BU-anchored UNESCO/UNITWIN Network, was the Conference initiator and played the primary role in planning and overseeing the Conference.  Professor Shahla Haeri, former Director of Boston University’s Women’s Studies Program and Founding Member of the UNESCO/UNITWIN Network, led a panel discussion on International Influences, with a focus on gender and the Iranian Revolution. For more information about these presentations, as well as a full itinerary from the conference, presenter biographies, and many full presentation texts, please visit http://www.bu.edu/wgs/conference2014/.
Posted by Casey at 12:48 PM