BU's Diane Balser at the University of El Salvador 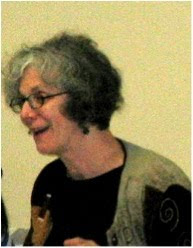 Dr. Diane Balser, who teaches Women's Studies at Boston University, is just back from El Salvador. She has a longstanding relationship with the country, and this month was hosted at the University of El Salvador. Dr. Balser gave a talk on "The Crisis in Capitalism and its Effects on Patriarchy." She interacted with men and women, including students, women from women's organizations, government officials, and feminist scholars from the University in San Salvador.

For more than twenty-five years, Diane Balser has been an international trainer on women's issues and leadership development. She has led workshops for women (and women and men) in the context of this peer empowerment support networking in various locations throughout the world, including North and South America, Western and Eastern Europe, Japan, Africa, and Australia. She has given talks to conferences/seminars in South Africa, the Netherlands, Israel, and other countries.

Thus her recent work in El Salvador is very much linked to Dr. Balser's lifelong vocation leading training workshops on global issues pertaining to women's lives, and to the themes of our UNESCO/UNITWIN on Gender, Culture, and People-Centered Development.