Scholastique Kompaoré: Celebrating Access of Women and Girls to Education!

On the occasion of International Women’s Day 2020, a new film on the UNESCO Equal Access of Women and Girls to Education Project was televised in West Africa. Below is the actual television footage of the Project’s National Coordinator, Scholastique Kompaoré, who led this path-breaking endeavor in the 1970s. While the film entitled The Blood of Emancipation (Le sang de l’émancipation) centers on women leaders who tragically lost their lives in a bus accident at that time, the film Director Jules Ouédraogo is paying tribute to their pioneering contributions in lightening women’s workloads and promoting women’s empowerment. 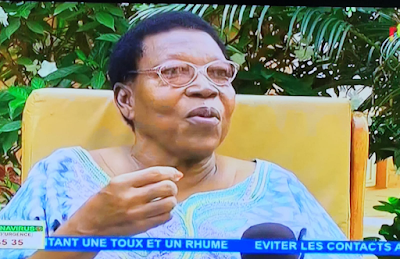 Congratulations to UNESCO/UNITWIN Affiliate, Cyrus Konstantinakos, on the forthcoming publication of an inspiring and visually engaging photo-essay book, Reclaiming the Pearl: Uganda Through the Eyes of Human Trafficking Survivors. The volume is co-edited by Hubert H. Humphrey Program alumna, Agnes Igoye, Ugandan Deputy National Coordinator Prevention of Trafficking in Persons. Please see Cyrus' personal announcement below, along with his selection of striking images from Reclaiming the Pearl by teams of Ugandan photo-journalists.
~ UNESCO/UNITWIN Network

Thank you to Brenda and Nicole for inviting me to describe Reclaiming the Pearl: Uganda Through the Eyes of Trafficking Survivors for the UNESCO/UNITWIN Network blog!

This book presents photos and written text by Ugandan survivors of human trafficking and others in their production teams on the beauty of their country. It introduces wide-ranging topics, from tropical rainforests to equatorial glaciers, and from ancient kingdoms to social entrepreneurship initiatives that address the local effects of climate change.

The title, Reclaiming the Pearl, expresses two sentiments. One is the photographer-authors’ hope to raise global awareness of Uganda as “the Pearl of Africa,” as it was described by Winston Churchill in 1907. The other is a celebration of the photographer-authors themselves and the strides they are taking to revive their dreams.

Our Global Cultures is a project I’ve been fortunate to create with Humphrey Fellows, humanitarian leaders in-the-making from developing and newly industrialized countries who spend a year in the U.S. under the auspices of the U.S. State Department. For this book, I was very fortunate to team-up with Agnes Igoye, a Humphrey alumna and a global voice in the fight against human trafficking. We were also joined by Phylicia Martel, a specialist in youth, gender equity, and women’s empowerment programs at Peace Corps Uganda, where we ran our photo-essay camp. The project was made possible by a grant from the U.S. Embassy in Kampala.

This book, and others that the "Our Global Cultures" project has produced in Japan, Guam, and Nicaragua, are all motivated by the idea of “internationalization at home”—the belief that local people who may lack global mobility deserve opportunities to build global agency. Our photographer-authors have certainly done so!

Note about “group” photo credits:
We had a limited number of cameras in this project, so the production teams shared cameras, and everyone agreed to credit photos to the groups rather than individual members.