There was great excitement in the Brighton/Allston community the evening of 17 June 2015 when Ronni Komarow was awarded the prestigious Unsung Heroes Award for her selfless commitment to the advancement of Brighton/Allston in a ceremony at Boston College.

Ronni in accepting the award declared:
"I certainly feel my fellow Board Members deserve the award too, and that whatever you put into things, you receive so much more in return! ..."
Here, Ronni was referring to her fellow Board Members of the Brighton/Allston Historical Society (BAHS, a UNESCO/UNITWIN Affiliate), and of the Friends of the Faneuil Branch Library. Ronni was later invited to become a member of Boston Creates, Mayor Walsh's new creative arts initiative.

Participants at the festivities, and notably at the BAHS and Friends of Faneuil tables, were thrilled to be present at this festive occasion.

As the event's official program stated, Ronni was lauded for her energetic participation at the forefront of the campaign to keep the Faneuil Branch of the Boston Public Library open. She is an officer of the Board of Directors of the Brighton/Allston Historical Society and a member of its Women's History Initiatives Standing Committee. The nomination papers also cited her work at the Brandeis University Women's Studies Research Center. 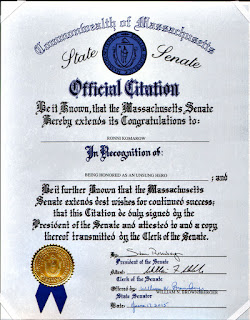 Members of the UNESCO/UNITWIN Network from the Boston area and around the globe join in congratulating Ronni.