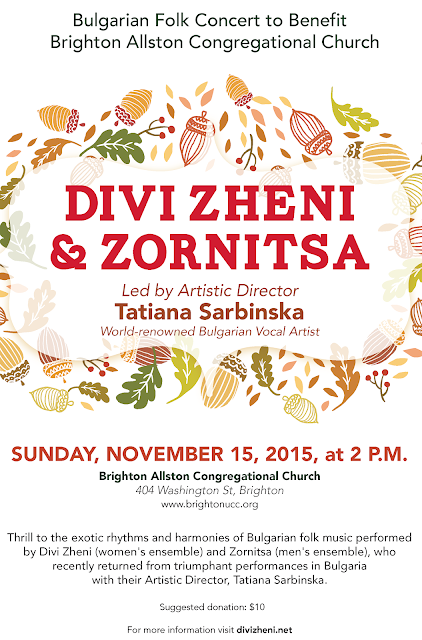 As Barbara shared with us, “Divi Zheni is a chorus and orchestra of 25 women from the U.S. and Bulgaria directed by renowned Bulgarian vocalist, instructor, and conductor Tatiana Sarbinska. We sing to share our love of Bulgarian music—once you have heard it, you can never go back.”

Barbara teaches courses in women in literature, mass media, and film at BU’s Women’s, Gender, & Sexuality Studies program. As the Divi Zheni website notes, “She has traveled extensively in the Balkans, including trips to Bulgaria, Greece, Macedonia, Croatia, Romania, Hungary, and the Czech Republic. She has studied Balkan dance and singing at seminars in Ohrid, Macedonia with Goran Alacki and Ljupco Manevski [Tanec] and Bansko, Bulgaria with Tatiana Sarbinska, and the dance of Transylvania at a dance camp in Felsosofalva in the Transylvanian part of Romania [Szekelyfold]. She has been folk dancing since a fateful night in 1971, when she stumbled upon Israeli dancing in the MIT Student Center.”

Dr. Shahla Haeri, one of the founding coordinators of the UNESCO/UNITWIN program based at Boston University, will be featured in the Asian Women in Public Life lecture series. Shahla will be speaking on "Muslim Women's Paths to Power: From Bilqis to Benazir" on November 9th at 12:15pm at the Pardee School located at 121 Bay State Road, Boston, Massachusetts. 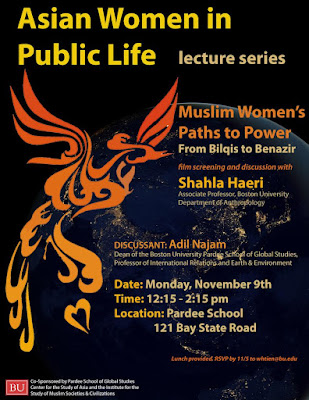 Dr. Adil Najam, Dean of BU's Pardee School of Global Studies, will be the discussant.

As Shahla shared with us on the theme:
"'Kings, when they enter a city, disorder it, and make the mighty ones of its inhabitants abased. Even so they too will do' (Quran 27: 32-33).  So says judiciously the Queen of Sheba to her advisors and counselors in the face of imminent threat of war from a formidable adversary.   Juxtaposing the Quranic story of the Queen of Sheba, and the purported Prophetic hadith: 'Those who entrust their affairs to a woman will never know prosperity,' Shahla Haeri in her forthcoming book (2017) attempts to bring to life stories of the legendary and historical women who have reached the apex of authority and power in patriarchal Muslim societies.  Taking an ethno-historical view of Muslim women’s paths to power and a cross-cultural anthropological perspective, she explores the circumstance surrounding women’s ascent to power in medieval Egypt, Yemen and India or in modern Pakistan, Turkey or Indonesia.  She critically discusses the politio-religious discourses, and cultural beliefs and practices that have helped or hindered women from attaining political leadership and authority in Muslim societies.  Highlighting medieval and modern examples of Muslim women who actually occupied the exalted office of a sultan, a queen or a prime minister, Haeri problematizes the assumption of religious objections to women's political leadership in Islam. She asks whether the justifications for barring women from positions of political leadership are to be sought in a divine mandate, a prophetic dictum, or patriarchal cultural traditions?  The theoretical line that runs through women’s narratives is threaded through a focus on the paradox of patriarchy, i.e., the animating dynamics of father-daughter relationship.  With the growing Muslim women’s mobilization in the public domain and their demand for political representation and leadership, this book on the historical and contemporary Muslim women rulers is highly timely."

Watch this space for news on the release of Shahla's book!

Article by Camille Nguyen on the screening of Shahla's documentary and talk as part of the lecture series of BU's Center for the Study of Asia, here