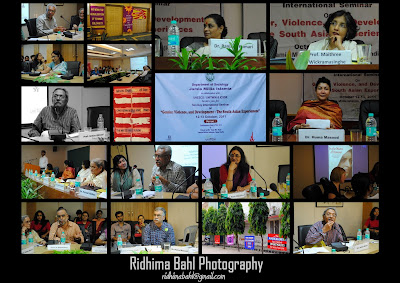 We are pleased to announce that our colleagues at Jamia Millia Islamia University in New Delhi have provided us with a terrific visual portrayal of the most recent UNITWIN International Seminar hosted at Jamia. To see the entire collection of photos, please click here.

Seminar organizer, Dr. Arvinder Ansari of Jamia, has also just shared with us that the thirty-five papers presented in the seminar are due to be made into a UNESCO Reference Document by early next year. We of the Boston University-based UNITWIN are most excited about this recent news and join our friends at Jamia Millia Islamia in expressing our deep gratitude to Mr. Najeeb Jung, Vice Chancellor of Jamia Millia Islamia University. His help and unwavering support helped to make possible this inaugural event of the second phase of our UNITWIN Network. The two-day gathering on "Gender, Violence and Development: The South Asian Experiences" marked another "first," as the first International Seminar organized by the Department of Sociology, Jamia Millia Islamia. It was well attended by scholars and students, and deemed "a big hit"!
Posted by The Couscous Diaries at 4:02 PM

Was just settling down to write to you. Today's Seminar was an unqualified success! Everyone was really happy at the variety of presentations and the two halls were packed with students and faculty, right to the end- even though the Session went on for about half an hour longer than scheduled.

The UNESCO delegate gave a very fulsome description of the UNITWIN initiative- and lots of very nice things were said about the Boston-based team- quite deservedly.YOU WERE GREATLY MISSED. Arvinder did a sterling job! 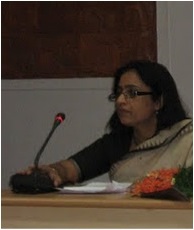 Seminar organizer Dr. Arvinder Ansari of Jamia Millia Islamia, New Delhi
There were many presentations from all sorts of places in India- and from outside too; a very intellectual delegate from Colombo who decided to "de-construct" the definitions of "empowerment and development". We will be hearing from Dr. Imtiaz tomorrow.

There are several male delegates here and a couple of very interesting papers looking at "masculinities". Kamla Bhasin (author and social activist) gave a stirring call to ditch patriarchy, which she said was squeezing the "humanity" out of all the men- here in the room and elsewhere.

My own presentation on empowerment and development from the grassroots perspective went off quite well. Tomorrow, I'm chairing! UNITWIN was well represented by Malkit (Professor Malkit Kaur of Punjabi University at Patiala) and also JMI's Dr. Savya Saachi; Asha (Professor Asha Mukerjee of Visva-Bharati) will be able to come tomorrow.

(Chandana Dey, Co-Founder of the Bhab Initiative of West Bengal and a founding member of the UNITWIN on Gender, Culture, and People-Centered Development)

Day 2 was really an emotional day- as we heard first-hand accounts of state-induced violence against women in neighbouring countries- the Hudoot in Pakistan and the fatwas in Bangladesh- and although we were told to leave "emotions" outside the door- it was difficult. It occurred to me that perhaps a Conference of this kind could only be held in India. 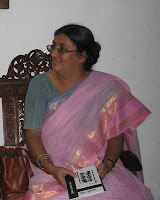 Chandana Dey
There were also stories of hope: for example, how the police approached the Social Department of Jamia Millia to sensitize them on the topic of domestic violence and, in particular, understand the ramifications of the Domestic Violence act;  how women activists working with women's organizations are finding the courage to act as "change agents" in their personal lives; how men working on women's issues are re-evaluating their own masculinity and the way they have been brought up.

I was really impressed at the level of scholarship displayed by the young scholars who showed both intellectual rigour and chose topics that had a humanist relevance- and which the UNESCO delegate, Dr. Huma Massod, hopes will make it into working papers for May 2012. Huma says she's had the good fortune of working with you and hopes to really take this UNITWIN initiative to ever greater heights. I think, too, that Arvinder achieved such a high benchmark with the themes, variety of papers, the level of interaction, and the extremely warm atmosphere for all who participated. I'm sure the other UNITWIN partners will now be doubly inspired. 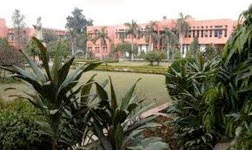 Picture courtesy of Jamia Millia Islamia Alumni Directory
I also had the good fortune to meet several "gurus"- Kamla Bhasin, Mary John, and such big names such as Imtiaz Ahmed. To have so many "eminent personalities" interacting, under one roof, with scholars and students alike on an equal footing: what better example of building a new world where hierarchies will dissolve and where we can think out of the box? We heard about the 'paradigm of patriarchy" from a Sociologist/feminist man, who's now working to build shelters for the homeless women in Delhi. The ex-Head of the Sociology department of Jawaharlal Nehru University (JNU), Dr. Oomen, spoke about the need to eradicate not just "structural and physical violence" but also what he termed "symbolic violence"- verbal abuse of women inside the home. We also heard the repeated demand that participants in the development process stop and think about the root causes of violence- those that are separate from issues of equity and justice; namely, if one achieves more egalitarian economic relations, this does not necessarily impinge on social relations and improve gender balances- or stop the violence inflicted on women.

What better example of active participation than Dr. Mohini Anjum, who used to head the Sociology department of Jamia, and had many students among the faculty today- and who chose to come all the way from Ghaziabad to attend the Seminar.