Report on “Of Pitfalls and Possibilities: The Case of India and Feminist Anti-Rape Organizing Across Difference”

“South Asia is described in the Status of World’s Women Reports as the world’s ‘most unsafe’ region for women – with Afghanistan, and India in that order – as the two ‘topmost unsafe’ countries – in terms of crimes against women, female foeticide, honor killings and overall discrimination.”

In introducing Professor Dhar on behalf of WGS, Dr. Brenda Gael McSweeney highlighted events and statistics including the one quoted above that demonstrate the severity of violence against women in India and therefore just how vital it is for academics and researchers like Dhar to be focusing on this issue.

Dr. Smriti Rao, Visiting Research Associate at WSRC, and Associate Professor of Economics and Global Studies at Assumption College, submitted the following report on Dr. Dhar's lecture and the event:

“On December 16, 2012 a 23 year old young woman with a male companion got on what they thought was a bus to her New Delhi neighborhood.  He was there because it would be unthinkable for a woman of any age to get on a Delhi bus alone after dark, which says a great deal about what it means to be a woman in India today.  In this case, as it turned out, that precaution was not enough.  The six men on the bus, including the driver, were on a joyride after an evening of drinking. They beat both the woman and her companion unconscious and brutally gang raped her. Then they left them both for dead on a New Delhi street, where, until the next morning, not a single passerby stopped to help.

She died a few days later of severe internal injuries – she had lost almost all of her intestines. The police in this case did their job and found the six rapists, a task made easier by the fact that they hadn’t thought to hide or run away.  Two were teenagers.  The two oldest, like the young victim herself, had come to the city as children when their families left villages in northern India to seek a better life in the city. The rest were more recent migrants to Delhi.

One difference in the backgrounds of the victim and her murderers was that her family had managed some degree of upward mobility. They had, after considerable sacrifice, been able to pay for her to complete a degree in physiotherapy (a degree in medicine would have been too expensive) so that she could aspire to becoming part of India’s urban middle class. And that, as Debotri Dhar argued in her talk, made all the difference when it came to how the media and its urban consumers responded to her rape and death.

Dhar, a Visiting Scholar at Boston University Women’s, Gender, & Sexuality Studies Program, is a researcher and an activist whose main area of focus is sexual violence against women in South Asia.  Her dissertation work on rape victim suicides in India revealed the importance of class and caste as well as gender in framing acts of violence against women, or, as she put it, “how causes become causes.”  As she told her audience of students, faculty members and researchers from Boston and Brandeis Universities and beyond, rather than being an act of “embodied shame”, the rape victim suicides that are documented as such in India tend to be very public acts committed by less privileged women to protest the failure of the state to prosecute their rapists. These women, Dhar’s research shows, “offer up their bodies as a way to get justice,” in a country where too many acts of violence against women go unreported or, when reported to the police, go unprosecuted if the victim is from a less privileged caste or class than her assailant. The media shares the state’s brutal indifference to the fates of these women, leaving these very public acts of suicide as the victim’s only recourse.

On the other hand, the case of the “New Delhi gang rape”, as it has come to be known, received tremendous national media attention and resulted in an outpouring of public protest against not just the aggressors but also the Indian state’s failure to ensure (or even show much interest in) women’s safety.  Dhar argued that the stark contrast with the rape suicide victims she had studied was partly explained by the girl’s perceived status as a member of the middle class, and that of her assailants as outsiders to the city. The assailants were portrayed as migrants from a backward and rural patriarchal past that was holding back a modernizing India (never mind the fact that at least a few of them had spent most of their lives in New Delhi).  Class, as Dhar emphasized, was key to the framing of the event.

This framing takes on an additional layer of complexity when we move from national to international spaces, as we must in building transnational alliances as feminists.  Gendered acts of violence in the 'third world' have a long history of being interpreted by those in the West as ‘barbaric’, and thus evidence of the need to ‘civilize’ those cultures. Dhar pointed to a recent article on the Delhi gang rape that argued that the international publicity and outrage it generated largely fell within the narrative Gayatri Chakravorty Spivak, postcolonial theorist and philosopher, famously termed ‘the white man rescuing the brown man from the brown woman’, and that feminists from the third world needed to push back against that narrative.

Dhar’s central argument, however, was that while acknowledging the power of that narrative and the fact that this event was surely framed in that way by much of the western media, pushing back against that narrative cannot mean denying the real and horrific acts of violence committed against this particular woman, and against thousands of other lesser known victims in India. She argued that, hard as it is to do so, the alliances we build must avoid the pitfall of the “white man’s burden” while at the same time calling out violence and injustice wherever they may occur.

Her own conclusion was optimistic – she told the audience she believed that such alliances were possible and most powerful when they link violence against women in other contexts to those against women in western cultures, and when they force us to look “within as well as without”.
In the lively discussion that followed, audience members pointed to further commonalities across cultures, such as the functional role of rape as a means of disciplining all women (not just the rape victim). There was a discussion of the degree to which age shaped narratives about the victim and the assailant, as well as the extent to which the rapists in the Delhi case were themselves victims of the wider economic failures of the Indian nation – adrift and rootless in a large city with little real prospect of a better life. There was also considerable interest in the role of the Indian state and the nature of its response to the public protests that followed the events of Dec. 16th. Dhar argued that while the state had moved slowly, she believed that there had been some real change and called upon her audience to join the struggle to make the world safer for women everywhere.”
~ Report on Debotri Dhar's Lecture submitted by Smriti Rao, GaIDI/WSRC, Brandeis University

Debotri's lecture was followed by a poignant reading at WGS from her volume of short stories, Postcards from Oxford: Stories of Women and Travel 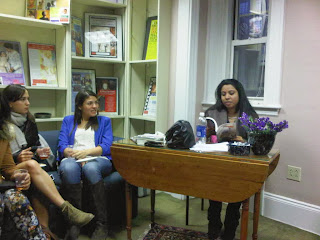