We are pleased to share that our WGS-based Fulbright-Nehru Scholar, Vrinda Varma, has an article entitled "The Food-Woman Connection: Is Food Really a Woman’s Thing?" in the recently published Making Sense of Food: Exploring Cultural and Culinary Identities. The editors of this volume published by the Inter-Disciplinary Press are Sally M. Baho and Gregory A. Katsas. They write that "While each piece is characterized by an internal balance of theoretical, empirical, and methodological approaches, each explores food as it relates to some unique aspect of society, culture, and/or the human condition. All put together, the nine chapters “cook up” an understanding of food in its true multi-layered character" (source: http://www.inter-disciplinary.net/publishing/product/making-sense-of-food-exploring-cultural-and-culinary-identities/).

As Vrinda shared about her chapter,

"Food and taste have traditionally played a major role in literature as ways of preserving tradition and creating communal spaces. However the recent expansion of the popularity of food writing, food based T.V. shows, and the obsession with what to eat and what not to eat warrant an exploration into the politics of food and gender. Cooking, feeding, and serving have traditionally been ascribed to women and any mention of food seems to inexplicably invoke the feminine. This chapter argues that this very process of subconsciously invoking the female in relation to food is a product of active and purposeful discourses in popular media that attempt to provide no space for a woman (or a man) to break out of the stereotypes. This chapter looks at how food-women connections are created in deliberate, persistent manners in popular media, especially in advertisements and magazines." 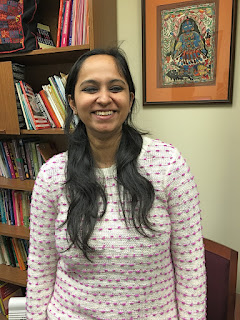 For her doctoral research, Vrinda is exploring how narratives about food, including recipe books, women's magazines and food advertisements (de)construct, maintain and perpetuate gendered identities for women, notably in her home state of Kerala, India.