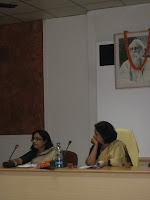 Presented November 15, 2008 at the Visva-Bharati International Conference on Women

"Women bear multiple identities and these identities are defined and re-defined in context of nation, race, gender, community and ethnicity. it is a well-recognized fact that women suffer in social-conflict on account of their gender and on account of their religion. Women may serve as the symbolic figuration of a nation. They are also seen as embodiments of male honour and as such become a site of contestation for this honour. Hence, the defense of women and children becomes and rallying slogan of men going to war, as women from opposing factions fall victim to rape and other sexual atrocities when represented as guardians of the 'race' and nation.
Women not only signify and demarcate juridical, political, cultural and psychic boundaries of a national collectivity, but they inscribe these boundaries in and through a myriad of cultural practices, their assumption of particular feminized subject positions, their relationship to the upbringing of children and involvement in religious and other ritualistic practices that construct and reproduce particular nations of tradition.
Women are considered a property and their sexuality is the most prized possession of the patriarch she suffers during the collective violence due to her sexuality and in the aftermath on account of her gender. During the times of collective-violence, ethnic-conflict and civil war, women become target of attack not as women but as the property of the Patriarch or as the icon of community honour. Women's sexuality is here attacked so as to teach men of the community a lesson that, as the natural guardians of women, they are not able to protect their women and must suffer the loss of their social property.
Women are very important for the reconstruction of the community. It is true that they witness the killing of their male members: their kith and kin are wiped out and the entire fabric of their socio-cultural existence is torn asunder. Women are left companionless and shelter-less and thrown into an alien environment. Under riot-torn conditions, when women's emotional and material world is destroyed, they are left with additional burdens. Thus, violence and social conflict not only affect women physically but also increases their responsibilities. As the scale of ethnic and social-conflict causalities has risen, both women's suffering and their responsibilities have increased.
Making visible women's experiences in situations of violent conflict, their agency in managing survival and reconstruction and women's notions of security and peace, is necessary to get due recognition for women's experiences as a resource and a space in formal politics for mainstreaming gender in the peace building process."
Dr. Arvinder A. Ansari
Associate Professor
Department of Sociology
Jamia Millia Islamia
Posted by Kassia at 7:41 PM