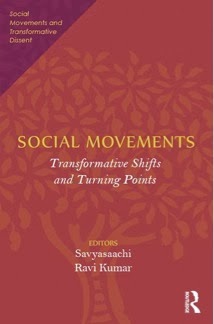 Dr. Savyasaachi, a founding member of our UNESCO/UNITWIN Network, and Dr. Ravi Kumar, both of Jamia Millia Islamia University in New Delhi, are co-editors of a new volume just published by Routledge, titled "Social Movements: Transformative Shifts and Turning Points." It analyzes such issues as difference feminism, protests against globalization, and legal opportunity in struggles, especially in South Asia.

The publishers highlighted the following:

"Mapping the development of social movements in South Asia, this book offers a penetrating study of the nature and modes of protest and dissent as manifest in people’s struggles in securing equity, justice and security in labour, gender, human and environmental rights.
Amid significant changes in society, economy and polity, combined with far-reaching consequences of globalization and neoliberalism, it situates the understanding of social movements within concrete experiences and examples of diversified resistances, collective dissensions and radical transformative mobilizations.
Through case studies and examples from across South Asia, that reinforce vibrant democratic dissent, this volume challenges the view that in recent years there has been a decline of mass movements in the region. Besides drawing attention to the interconnections between New Social Movements (NSMs) and Classical Labour Movements (CLMs), it discusses the patterns of development of growing NSMs, particularly in South Asia, such as the Zapatistas’ revolution; anti-capitalist movements; protests against globalization, Statism and difference feminism; and roles of language, money and legal opportunity in struggles.
This book will be of interest to students and scholars of sociology, social movements, politics, gender and feminist studies, labour studies, as well as the general reader."
Posted by Brenda Gael McSweeney at 2:46 PM