"BU at Forefront of UN Push for Women’s Studies Program will foster education, activism in India" By Vicky Waltz 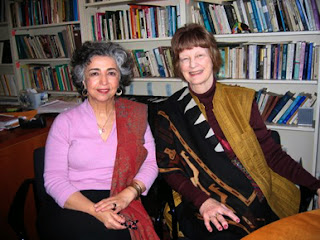 Three years ago, at a Paris meeting of the United Nations Educational, Scientific and Cultural Organization (UNESCO), Brenda Gael McSweeney described a case study that her students were doing in West Bengal. McSweeney, a visiting scholar in the BU Women’s Studies Program and a former UN executive, told her colleagues that while the project originally involved helping both male and female villagers earn their livelihood through customary means, such as practicing traditional medicine, it was the women who had become most interested.

“My colleagues said this study was exactly what they were looking for: universities that would be more than theoretical ivory towers,” McSweeney recalls. “Universities that would instead provide a two-way interface between nongovernmental and civil society activists and those in academia.” Thus was conceived the Network on Gender, Culture, and People-Centered Development, comprising the BU Women’s Studies Program and participating Indian partners.

Now that network has led to BU’s becoming the first university in Massachusetts and the third in the United States to join a larger UN-funded effort to promote research in women's and gender studies. The effort, UNITWIN (university twinning and networking scheme), pairs universities with nongovernmental organizations and community activists worldwide to promote an integrated system of research, training, information, and documentation of activities in UNESCO’s spheres of competence. It also provides advice and expertise to assist partner countries in gender, culture, and development studies.

The University is partnered with three universities and two NGOs in : Jamia Millia Islamia (JMI), in ; at , ; , in ; the Bhab Initiative, in ; and the Cultural Resource Conservation Initiative (CRCI)/The Lime Centre, in . Coordinated at by McSweeney and Shahla Haeri, a and Sciences associate professor of anthropology and director of the CAS Women’s Studies Program, the project has been endorsed by both Koïchiro Matsuura, director-general of UNESCO, and by BU President Robert A. Brown.

“We think that this program is what gender and women’s studies are all about,” Haeri says. “There is so much opportunity for exchanging ideas and learning from our partners in . We believe in interdisciplinary and cross-cultural work, and this program ties in directly with Dr. Brown’s global initiative.”

Officially launched in September, the partnership hopes, among other things, to help Indian universities and nongovernmental organizations develop their own women’s studies programs. “More and more universities from different countries that would never have considered a women’s studies program 10 or 20 years ago are realizing that there’s a real need and demand for it,” Haeri says. “Now they’re not only establishing centers, but they’re actively trying to connect with other universities to have models to look at and incorporate those into their own needs and objectives.”

One of the program’s largest undertakings is an international symposium planned by for December 2008 in . The event will include conferences and lectures about women’s livelihoods, rights and political voice, and education. Haeri hopes to involve professors and students from both BU and in scholar exchanges and internships.

“It’s interesting to see how very grassroots movements resonate with what’s happening now in the highest political levels,” says McSweeney, citing India’s 73rd and 74th Constitutional Amendments, which passed in 1992 and provide a 33 percent reservation for women in local government bodies, among other provisions.

“Community involvement is crucial,” Haeri says. “And we must involve men as well as women. After all, gender involves two sexes, and men have to be involved to appreciate that gender equality is good for the welfare of the family and the community.”

Vicky Waltz can be reached at vwaltz@bu.edu.