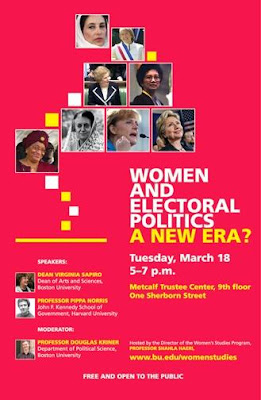 On March 18, in the Trustees Ballroom of Boston University (BU) the Women Studies Program hosted a lecture and discussion entitled, “Women and Electoral Politics: A New Era?” as the opening event to Genderfest ’08 - a student initiated week of events attempting to answer the questions of Gender on Boston University’s campus. The Director of the WSP, Dr. Shahla Haeri began the event with welcoming remarks and set the stage for the discussion. “We are in the midst of an intriguing Presidential election in the United States, for the first time a woman political leader is a major candidate,” she exclaimed. “Women leaders have a large historical and global presence.”

Pippa Norris, Professor at the John F. Kennedy School of Government, Harvard University, presented on “Shattering the Marble Ceiling: Barriers Facing Women Leaders.” She put the current US Presidential race in a broader international context by looking at global trends, theoretical frameworks (cultural, structural and institutional) and evidence and survey data. Dr. Norris’ intriguing lecture touched on the future direction of American politics in the “post-feminism generation.” Through the framework she has developed, Dr. Norris concludes that culture remains a barrier, but these barriers can be overcome with institutional reforms.

Dean Virginia Sapiro, Boston University’s College of Arts and Sciences Dean, launched the event saying, “It has been a new era for a long time, but I want this new era to end, women in politics should be normal.” Her discussion focused on the world of scholarship and began by looking at women in the legislature. She explained the base line in American politics: that until the 1950s only 2% of Members of Congress were women and in 2008, only 16%. “All discussions must take place in relation to the base line and if you look at the numbers it is clear that women are not equal to men in American politics.” Dean Sapiro said that she does not want to give us answers; she will wait for the data, and that she is developing a framework for discussion. “We do not know who will win the Presidential election, but gender is making a big difference this year- the gender discussion is being brought to the floor.”

The full house event and lively question and answer session was moderated by Professor Douglas Kriner, Department of Political Science at BU.

Story prepared by Margaret Hartley.
Posted by UNITWIN at BU at 11:25 AM