Our Next Addition to 'Women & UN Origins' Series, Dr. Marilyn Carr's "Women, the League of Nations and the UN: A Story in 3 Parts!"

﻿﻿Hope you’ve been having a pleasant Winter Solstice season -- despite these trying times!

We're excited to announce the next addition to our new "Women & UN Origins" series of the BU-based UNESCO/UNITWIN Network on Gender, Culture, and People-Centered Development! Joining us once again in shaping and publishing the series is the Buenos Aires-headquartered Global Network of UNESCO Chairs on Gender led by Gloria Bonder.

Our latest in the series is an article by Marilyn Carr entitled "WOMEN, THE LEAGUE OF NATIONS AND THE UNITED NATIONS: A STORY IN THREE PARTS" -- see link below. Dr. Carr established UNIFEM’s Regional Office for the Southern African Development Community (SADC) based in Harare, and carried out many other trailblazing UN functions!

This feature provides Marilyn's point of view on "how the work of earlier generations of women formed the basis of future work on gender equality in the UN." It is indeed hard to imagine women having successfully gained the roles and influence that they did over time in the United Nations System, without being able to build on the foothold established during the League of Nations era.

We're grateful to Marilyn for her clear presentation of insights into women's priorities, and the intensity of their struggles, during this foundational chapter.

As Gloria has noted, "we want particularly to encourage young researchers and activists to know and value what has been done and achieved." Both our UNESCO/UNITWIN Network and the Global Network of UNESCO Chairs on Gender wish to highlight the importance of sharing accounts on the creation of key international institutions and pathbreaking initiatives, for today’s social justice activists, academics, students, and policymakers.

Wishing you a bright 2021!
Be super well--Brenda 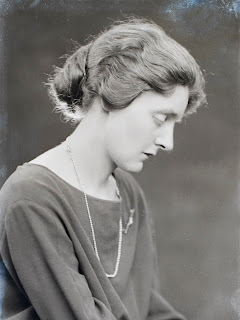 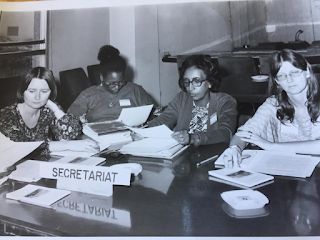 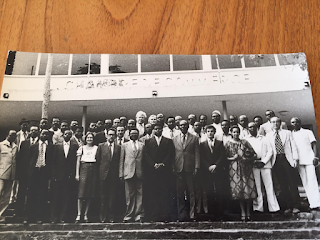 "One of my Regional Science and Technology Meetings while working at ATRCW. Note because of subject matter Governments sent men! Only women there were me and my young Ethiopian Assistant!" - Marilyn Carr 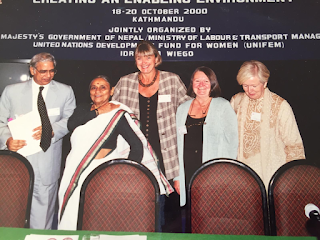