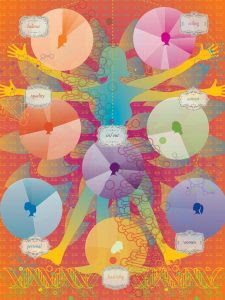 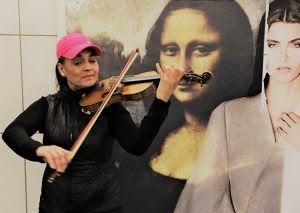 "As long as women are using class or race power to dominate other women, feminist sisterhood cannot be fully realized" ~ bell hooks

"Stronger Sisterhood: Representing Intersectional Identity," is a virtual exhibition in a virtual gallery that explores the multidimensional and intersectional identities of women.

The history of feminism has often been described in “waves”. The first wave is defined by the fight for women’s suffrage from the late 19th to early 20th century. The second wave, in the mid 20th century, focused on gender equality in the workplace, the home, and in civil liberties. Both of these movements, while making great strides for women, failed to address deeper compounded layers of oppression and marginalization faced by many women. First and second wave feminism were largely white middle class women’s movements and were often exclusionary of women of color, the LGBTQ+ community, working class women, women with disabilities and so on. The movements kept a narrow scope by focusing on a one dimensional vision of what it means to be a woman assuming common experiences and levels of marginalization based on gender identity. In reality, oppressions experienced by way of gender do not exist in a vacuum but instead intersect with multiple facets of identity. In 1989, lawyer, civil rights activist, and critical race theorist, Kimberlé Crenshaw coined the term “intersectionality” to describe how gender, race, class, and other individual characteristics intersect and augment oppressions. At present, the recognition of intersectionality’s importance in women’s rights has grown into a third wave of feminism that strives to recognize all the forms of oppression that female identifying people face.

Art created by a diverse range of female identifying artists is a key into visualizing and representing intersectional experiences. “Stronger Sisterhood: Representing Intersectional Identity” showcases that women’s experiences are not one but many, and only through diversity in representation can we begin to grasp a three dimensional view of all women. How do our experiences as women differ due to other facets of our identity? How are we made stronger by recognizing and honoring these differences? How has the recognition of intersectional feminism grown and where is there more work to be done?
Posted by Nicole Rizzo at 12:54 PM